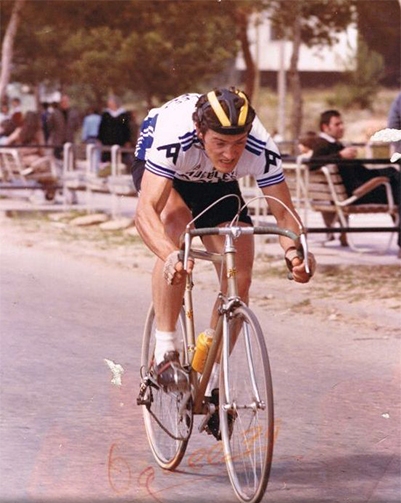 The beginnings of Vitoria, go back to the 70s, when Juan Vitoria (founder) discovers his passion for cycling, starts to compete and in the 80’s he makes the leap to professional.

Between 1974 and 1978 he competed in Spain, Switzerland and Italy. He gave the leap as professional in 1.980, debuting in the Spanish "Manzaneque" Professional Team.

In addition to cycling, he was passionate about cycling and bicycles, which led him to seek opportunities in this world.

Settled in Locarno (small town of the Italian Switzerland), Sergio Golmeski (artisan of frames) offered to work with him. He felt very lucky to learn and dedicate to this genuine technique that also was his passion.

With the idea of ​​returning to Spain, around 1983, Juan bought all the machinery necessary for the manufacture of his own frames. Precision Italian machinery was acquired at Marquete Lange, same place where Eddy Merck had also acquired its machinery, years before. As it is known, at that time in Italy there was a great tradition of bicycle manufacturers and craftsmen.

He moved all the machinery to Spain, and during some years, he alternated seasons in Switzerland where he continued working with the artisan, and in Spain where he started to design and make his own frames.

Juan began to achieve success in his technique of manufacturing steel frames, which did not go unnoticed as at that time just few people were involved in this sector in Spain.

In order to optimize the quality, control and production of his frames, Juan decided to go further, it was time to give name to this adventure that had begun a few years ago and had already taken shape on a strong professional base. Then he registered his own brand, so it was in 1988 when “Ciclos Vitoria” was founded. He named his own frames:” Vitoria”, name under the brand of bicycles was created. It would be the moment in which the development of his career began, and of a life too.

Since then, the company has seen and experienced the greatest evolution that the bicycle has had since its existence.

From steel, through aluminum and the arrival of carbon, all are very diverse materials that require different techniques, phases and treatments in their manufacture as much as in their commercialization.

The social changes associated with the bicycle have also been very important. In the beginning, a road bike was a very specific product, only sought by cyclists by profession. Currently, cycling has become popular and has spread to all audiences, generating more and different needs, which have created solutions that adapt to the wide variety of practitioners of cycling nowadays.

Bicycle is in continuing evolution, and it is essential to know how to adapt quickly to changes and not to be outdone.

In 2014, the twin daughters of Juan, Esmeralda and Diana Vitoria have joined the company. Since then, the company has undergone great changes, internally, in production and organization processes, and externally, with a different image, and with different objectives, aimed at innovation, both in the product and in the consumer's experience.